A little over two months ago, I ranted and raved about Dash Shaw’s 3 New Stories. Excited by his experimental approach to graphic novel/comic book illustration and storytelling techniques, I have looked forward to the opportunity to explore more of the Shaw catalog.

On the surface, Bottomless Belly Button, a novel conceived from 2005 to 2007, looks like a conventional family drama. Upon the decision to divorce after forty years of marriage, the elders of the Loony family, David and Maggie, call their children and their respective families to the Loony headquarters (a beach house on a mysteriously desolate strip of sand) to break the news to everyone. As expected with any sort of major change, each member of the Loony family reacts in distinctive ways based on individual age and experience.

Dennis, the eldest brother, launches into a full adult tantrum and hysteria, determined to get an answer to why his parents decided to split. As the next-in-line head patriarch, Dennis feels a responsibility to understand his parents split and to try his best to keep the Loony family somewhat together by getting a reasonable answer. Accompanied on this trip by his wife, Aki, and son, Alex, Dennis unfortunately abandons them more and more as he delves deeper and deeper into his investigation of his parents’ relationship history and trajectory from the beginning up to the present.

On the other hand, Claire, the middle sister, remains unflinched. As a divorcee herself, marriage dissolution does not phase her; however, this indifference may stem from her current difficulty in returning to a romantic life and inability to release some residual feelings for her artist ex-husband. In addition, Claire must raise her awkward adolescent daughter, Jill, who also arrived with her mother for the family reunion before family disbanding. On the Loony beach, Claire and Jill both attempt to better understand themselves and escape their current situations, steering their focus away from Grandpa and Grandma Loony’s divorce.

Peter, the youngest of the Loony children, displays the least amount of distress of all. As the youngest and the outcast of the family (with his isolation exacerbated by Shaw’s illustration of Peter as a young man with a frog head), Peter has never felt any serious emotional connection to his family. His distance is further highlighted by the blueprints of the Loony beach house, showing how Peter’s room stands as the only room on the fourth floor of the house, far away from the rooms of his family and any communal rooms. As a failing filmmaker at the age of 26 whose inability to relate to his family transferred to a general inability to interact with other people with any modicum of social grace, Peter reacts to the divorce of his parents like a stranger invited to a family dinner where the uncomfortable news is released.

Consequently, Peter wanders, as usual, on his own course. Peter walks the beach with his kid niece Jill and eventually meets Kat, a girl who Jill bullies him to speak to. As his parents’ marriage ends, Peter begins a flourishing new relationship with Kat, a beach camp counselor who may be far younger than he is. Peter and Kat’s relationship has some truly awkward moments because of Peter’s inexperience, but their growth towards each other serves as a strong foil against the disintegration of David and Maggie Loony’s marriage.

Again, from what has been described, Bottomless Belly Button seems like a standard relationship drama for a white, middle to upper-middle class family. What I have yet to mention, though, is the presence of some undescribed, unidentified supernatural force that carries through the narrative, gradually smoothing away tensions, fears, and hatred. As Bottomless Belly Button progresses, every member of the Loony family reaches a level of acceptance of their situation; the Loony parents’ break up galvanizes a period of growth for all members of the family, and this mysterious force of nature or force of calm, be it from a deity or from elsewhere, pushes each Loony member onto a track that forces each person to experience something new and also reflect on past actions, allowing each member by the end of the book to have the resolution to return to their separate lives with a new perspective and a better ability to care and support the people in their lives.

Beyond the strength of the core narrative, what really makes Bottomless Belly Button special is its ability to weave in artifacts of each character into the story, ranging from childhood pictures to love letters between David and Maggie to even a review of Peter’s failed film. By entangling these seemingly trivial pieces of memories, Shaw immerses the reader into the characters, allowing us to understand the motivations and the full perspective of each person at the beginning of the visit, which then allows us to compare the shifts in demeanor and viewpoints by the end. Further supported by some brilliantly expressive, yet simple illustrations, Bottomless Belly Button sets a consistent tone and mood that pulls the reader into the full world of the Loony’s, making the reading of the somewhat intimidating 720 pages feel like a drive where the end is unknown, but there is a general synchrony with the surroundings that forces you to pull your eyes away from the clock and speedometer, causing you to release your thoughts and engross yourself in the small microcosm currently existing around you. 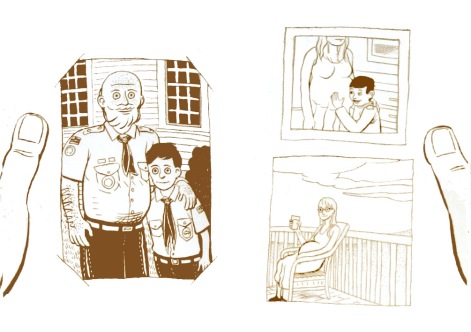 Bottomless Belly Button, despite its many quirks, is overall a serene and meditative work. It reminds the readers of the different stages of life in which we can attain further development and how that growth impacts the people in our lives. Though not a read for children (as the spine of the novel warns), Bottomless Belly Button is a graphic novel that should be handed to any person currently approaching a major shift in their lifestyle or in their perspective of the world.