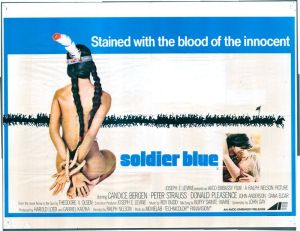 Why Is There An Image Of A Naked Bound Native American Woman Next to A White Couple Kissing?

Before anything can be said of Ralph Nelson’s 1970 film, “Soldier Blue,” we must first look at the horrific real-life event that film is based on; The Sand Creek Massacre of November 29, 1864. On that day, the Colorado Territory militia descended on a village of peaceful Cheyenne and Arapaho, murdering, raping and even mutilating over 150 people, mostly women and children. Led by US Army Colonel John Chivington, the cavalrymen planned the attack on a village, one that had entered into a peace treaty with their attackers and were even flying an American flag as well as a white flag to show their peaceful intention. Though the event was investigated by the Joint Committee on the Conduct of War, no one was ever prosecuted. A statement was issued by the committee on the massacre that included the following: “Having full knowledge of their friendly character, having himself been instrumental to some extent in placing them in their position of fancied security, he took advantage of their in-apprehension and defenseless condition to gratify the worst passions that ever cursed the heart of man.”

Some seventy plus years later, Hollywood began to take notice of this grim chapter in American history and began to depict the massacre in several films to varying degrees of accuracy and correct accountability, including; “The Guns of Fort Petticoat” (1957) and “Tomahawk” (1951). By 1970, the world had been shocked at the news of the My Lai Massacre of 1968, in which a company of the US Army soldiers premeditated the murder of a village of unarmed Vietnamese women and children. During this same era, activism lead by Native Americans had increased, culminating in the nineteen-month occupation of Alcatraz by United Indians of All Tribes, a group of predominantly university educated Native Americans in 1969. The time was right for a mainstream film to accurately capture the almost forgotten tragedy of the Sand Creek Massacre. Unfortunately, “Soldier Blue” was to be that film.

“Soldier Blue” was advertised in 1970 as “The Most Savage Film in History” which already draws some concern as this would be the selling point for this mess of a film. Indeed, the violence goes far beyond the threshold of violence that was set by Arthur Penn’s “Bonnie and Clyde” a few years earlier. Truthfully, the Sand Creek massacre scene is as wretched as advertised and does include every horrific detail that was brought up in testimony to the Joint Committee on the Conduct of War. On this point, director Ralph Nelson did not leave anything out to spare domestic audiences, but it is what leads up this moment that concerns me, as the narrative is banal collection of awkward acting and moments that cannot justify the coup de grace that occurs at the end of the film. Though applauded during its time, it is just another film that explores a tragedy in American history that was perpetrated by whites, where the whites come off as the real heroes. I usually refer to this phenomenon as “Mississippi Burning Syndrome,” referring to the dreadful 1988 Alan Parker film, where two FBI agents become the real heroes of the civil rights movement.

In “Solider Blue,” two white people, Cresta (Candice Bergen whose accent and behavior appear as though she was pulled out a checkout line during a Labor Day sale at JC Penney) and a soldier, Honus Gent (a sheepish Peter Strauss), who are the only survivors of a Cheyenne attack on their group. They must now travel across the frontier together to get to Fort Reunion where Cresta’s fiancée, an Army officer, awaits. Like so many films where a couple must battle the wilderness to only become closer, their story is eerily similar to many that have come before them with the only difference being that Cresta has lived with the Cheyenne for the last two years and is empathetic to their plight (think Radcliffe girl with a cause of the week). While our cavalryman, Honus, is a flag waver who believes that the USA can do no wrong and must be convinced of the opposite. The film of course leads to the scene in which Honus watches in terror as his beloved cavalry burn, rape and murder an entire village of innocent people. Director Nelson’s major error here is Cresta, who is played by Bergen as though she has no concept of the era her character is acting in during the film, or the fact that Cresta, despite her overwhelming sense of hippie entitlement, would never be allowed the kind of righteous access to the Cheyenne culture as an outsider and as a woman in the mid-nineteenth century. Sadly, the actual perspective of the Cheyenne and Arapaho is all but an afterthought. Lastly, the acting from our two leads as well the many supporting actors don’t go far beyond a mid-1960 TV western serial in quality.

Though critically praised, “Soldier Blue” was not well received here in the US by audiences as I assume that most people here circa 1970 during the height of the Vietnam War were just not in the mood to see American soldiers commit more atrocities on screen so soon after My Lai. Soldier Blue did do surprisingly well in England, where it was the #3 box office draw when it was released there in 1971, which should not be a surprise as I would imagine that the folks who lined up to see Cy Enfield’s “Zulu” were waiting on another film to satisfy their blood lust for witnessing another massacre of indigenous peoples by occupying forces. We weren’t too much better here in the States; before the news of My Lai hit the news broadcasts in 1968, folks lined up in glee for John Wayne’s pro-US involvement in Vietnam film, “The Green Berets.”

Director Ralph Nelson had on many occasions taken up the plight of marginalized people in his films, ranging from 1978’s “A Hero Ain’t Nothin’ But A Sandwich” to “Charly” to “…tick…tick…tick..,” and to his defense, most directors cannot control the kind of advertising that a distributor can create for a film, but, with “Soldier Blue,” Nelson’s original intentions just cannot accurately be understood here as the desire to bring this story to light is just buried under a morass of old western clichés, lame performances, and a campaign to stress the film’s violence as a selling point and not the perspective of the people who were really affected.