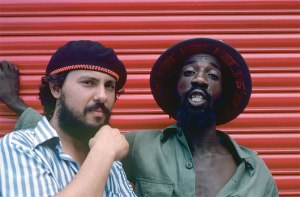 Living in Boston these last thirty years, I have come to have great pride in the role this town had in bringing international fame to Perry Henzell’s breakthrough cult reggae film, “The Harder They Come.”  The film had not been well received on its initial release in 1972 but was eventually launched into cult film status when the Orson Welles Theater here in Cambridge began running it continuously as a midnight film in 1973 and would continue to do so over the next ten years.  Despite the sometimes frigid weather, this town has been a hotbed for reggae music ever since and in 1996 I even began deejaying a ska and rocksteady radio show which I still produce to this day on WMBR in Cambridge and I even directed a few docs on the subject of reggae myself.  Also for many years I curated the European Short Film Festival here so with “Rockers,” I have found a movie that falls right I between those two great loves of mine, Jamaican music and European cinema.   Though “Rockers” is centrally about the Rastafarian lifestyle, I also believe that it falls into the sub-genre of the many films inspired by Vittorio De Sica’s 1948 neo-realist masterpiece, “Bicycle Thieves.”  Well at least it begins that way for sure.

De Sica’s “Bicycle Thieves” begins with our protagonist, Antonio, who is struggling to feed his family in an economically depressed post-war Italy.  To get work as a poster hanger, Antonio Ricci needs a bicycle so his wife sells their wedding linens, the only prize possession of the family, to afford to buy a bike for Antonio.    Shortly after Antonio buys his bike; it is stolen, putting the lives of his family to risk so he must take swift action to find it before he loses his new job.  Move the time and location to a post-colonial economically-depressed late 1970s Jamaica and you have the beginning of Greek-born director, Theodoros Bafaloukos’ “Rockers.”   Antonio Ricci is replaced by Leroy “Horsemouth” Wallace, who in real life is a very well respect drummer who many credit as creating the “rockers” style, and a man who is trying to feed his family on the meager money he makes as a session drummer and for playing watered-down reggae for tourists at a posh hotel outside of Kingston.   He proposes to his wife the idea of being a record salesman to make more money and so he needs a motorcycle which she must begrudgingly fund.  Horsemouth collects some debts, makes some loans and buys his motorcycle and immediately has it painted with the “Lion of Judah,” which refers to Revelations 5:5 to which Rastafarians interpret as the arrival Emperor Haile Selassie I of Ethiopia.  Horsemouth keeps his word and hustles some discs that he gets on account from legendary producer Joe Gibbs, and proceeds to sell them to the various record shops and sound system operators like Jack Ruby.  This does not last long as just like our hero in Bicycle Thieves, Horsemouth’ s motorcycle is soon stolen and he must take action to recover it quickly or his future is in serious jeopardy.

What becomes interesting is the way that Horsemouth, our hero in “Rockers,” distinguishes himself not only from De Sica’s film, but also from its reggae predecessor, “The Harder They Come. “  Jimmy Cliff’s Ivanhoe is at least on appearance, a born-again Christian, but is also the quintessential angry young man that uses violence at the first opportunity when trouble arises.  Whereas our Horsemouth, shortly after he avoids a violent encounter, goes through the trouble of breaking the fourth wall, speaking directly to the camera as he explains that he is an avowedly a non-violent Rastafarian.    Horsemouth saunters through the early parts of “Rockers” not with a pistol in his hand like “The Harder They Come’s” Ivanhoe but with a smile and a passive attitude, that is until he realizes that his autocratic cheapskate boss at the hotel is also responsible for stealing his beloved motorcycle leaving Horsemouth, as he would say, “vexed.”   After a botched attempt to retrieve his motorbike where Horsemouth takes a beating from his boss’ goons, he (Horsemouth) must now assemble his friends, who happen to be some of the greatest names in 1970s reggae music, from Big Youth to Dillinger to Richard “Dirty Harry” Hall, to not only steal back his beloved motorbike but to also “acquire” a wealth of riches to spread through Trenchtown in a Robin Hood-styled way.  Different than the outcome of De Sica’s film but they both share an ending where the common man understands the reality of the economic slide.

All of the above occurs with a laid-back and even almost comedic level; different from the previous incarnations of the plot as this is a Jamaica that has begun to look at Rastafarianism, not as previous generations have in the past as a dangerous cult, but as a religion with accepted social practices.  No scene bears this out more than when Horsemouth runs into his grandmother who berates him for his non-Christian lifestyle during a baptism in a river. Horsemouth is respectful of his grandma but still walks away with a smile as he extolls his Rastafarian beliefs as he is down but not out because he knows that Jah will see him through.    It is a small scene but one that puts the protagonist’s actions in this film in the right framework.

The mostly non-professional actors do their best with their roles, especially the late “Dirty Harry” who shines in a now notorious scene where he and Horsemouth take over a DJ booth at a club because they just aren’t down with soul (the West).  Of course the real star of the film is the soundtrack which has too many scenes of note to list here but three that always stand out for me: the aforementioned deejay scene with Dirty Harry, a concert scene featuring a beautiful performance from Gregory “The Cool Ruler” Issacs, and a small poignant scene where Burning Spear sings a cappella to Horsemouth to affirm his resolve after his motorcycle is stolen.

Though produced on a small budget, “Rockers” is visually more accomplished than “The Harder They Come” as many of these scenes are smartly framed by cinematographer Peter Sova and director Bafaloukos, who sadly would never direct another feature film but would go on to be the production designer for many of Errol Morris’ finest documentaries including: “TheThin Blue Line,” “A Brief History of Time,” and “The Fog of War.”  It is uncanny to me that a Greek citizen, whose introduction to Jamaica was getting arrested there in 1975 on suspicion of being a CIA spy while on assignment as a press photographer, would have the kind of understanding of Jamaican culture that would be needed to make a film like “Rockers.”  Though given the desperate political and economic realities of Greece these last fifty years, he might have understood a character and situation like Horsemouth’s more than any of us could.