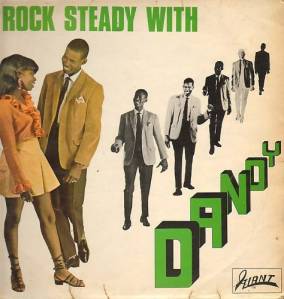 Thanks for making last week’s show, our two hour tribute to Jamaican Doo Wop Covers such a success as it was the number five ranked ska show on Mixcloud last week!  If you missed the show, it is here for your enjoyment:  https://www.mixcloud.com/bovineska/generoso-and-lilys-bovine-ska-and-rocksteady-jamaica-covers-doo-wop/

For this past week’s show on August 4, 2015, we went back to our label spotlights by focusing on the releases of the UK Giant Label.  But before we did, we did an hour of reggae and rocksteady, beginning with version to version to version excursion of Dennis Brown’s 1972 hit for producer Lloyd Daley, “Things In Life” which was released on the Syndicate label in 1972.  We ended that four song set with possibly the most popular side of the night, the ruthlessly catchy 1972 Techniques Label classic by Johnny Osbourne, “Ready Or Not.”  Our second set began with a version to version of the Toots Hibbert penned “Come Down” sung by Carey and Lloyd.  After a mento set and a long rocksteady set, that began with a exceptional soul cut from Prince Buster called “Land Of Imagination,”  Lily and I launched into the second hour and a spotlight of the rocksteady-heavy UK “Giant” Label.

Benny and Rita King distributed a lot of Jamaican music in England. In 1959, they opened up their R&B record shop in Stamford Hill where they would originally sell records, but by the early sixties, the two began to distribute their own records through their parent label R&B. Rita would often go to Jamaica to find talent and to talk to Jamaican record labels, and over their career in the record industry, the Kings redistributed Ken Lack’s Caltone releases along with tracks from U Roy, Roy Shirley, and Max Romeo, along with their star, Dandy Livingstone, who prompted the creation of one of R&B’s imprints, the Giant label, which is our label spotlight tonight.  In 1967, Dandy’s Rudy, A Message to You was released on Ska Beat, another R&B subsidiary, and saw quite a bit of commercial success, and as a result, the Kings decided to open Giant as a label that same year dedicated to Dandy’s work. The label had a total of 39 issues with 26 of them including Dandy’s involvement either as a vocalist or producer. Given Dandy’s seminal role in the creation of the Giant label, we felt it was appropriate to start off with one of his great tracks for the label, People Rocksteady. Beyond Dandy works, Giant also pressed/distributed some work from Jamaica, including Albert Tomlinson’s Don’t Wait For Me and Roy Shirley’s Dance Arena.

The August 4th, 2015 show with its Giant Label spotlight is available for your listening pleasure HERE ON MIXCLOUD.  If you like what we do, please subscribe to our show, its FREE!!!

Please do join us on Facebook to hear about upcoming spotlights and Jamaican shows in the So Cal area, rare Jamaican photos, and more!