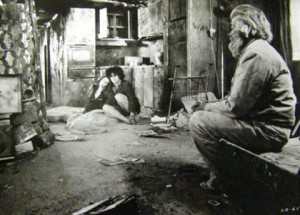 Glen and Randa Huddled Together

One can only imagine the level of artistic prostitution that occurs on any given day in production offices all over Tinseltown. The scene opens with an ambitious, yet sincere young film director who has a couple of acclaimed small budget arthouse films under his belt. Spurred on by the desire to have a meal that isn’t just boiled spaghetti with nothing on it, or the calls from an agent that is tired of only receiving a percentage of his client’s critical well wishes as payment, he takes a meeting with a production house that is interested in making his next masterpiece. Now, let’s say that year is 1970, and two years earlier the riotously popular post apocalyptic mythology of “The Planet Of The Apes” was thrust upon the world. Well, it would seem that no matter what pitch walked in the door, it most likely would be reset in a world after the great wave of nuclear/space travel gone wrong madness. The good news is that you can get a paycheck and still retain the option of not having your leads as ape people as long as they’re cute, and you show some full frontal because that sells as well. There were a bevy of films of varying degrees of quality made after the box office triumph of “The Planet Of The Apes” that seem to fit this scenario and one that always stuck out for me as somewhat positive was Jim McBride’s 1971 X-rated film, “Glen and Randa.”

I should go on record by saying that I have always had an almost unreasonable love for McBride’s work, even to the degree of my declaring that his tawdry 1983 remake of Godard’s classic “Breathless” superior to the original…Yes, even with the slightly more dismal acting talents of Valerie Kaprinsky as Gere’s paramour. I adored the frenetic energy of that version, energy that seemed to be missing from Godard’s story of a pair of shoegazing lovers, one being an obnoxious poseur, the other being a beautiful, yet relatively soulless dolt. Regardless of which version you prefer, “Breathless” is at its core is a love letter to low budget films from a Hollywood that already had disappeared. Before making the big jump to mainstream films, McBride had received accolades for a trio of very personal independent docudramas, beginning with his debut film, 1967s “Henry Holzman’s Diary,” a film that toys with the trappings of cinema vérité. McBride’s 1971 post-apocalyptic film, “Glen and Randa” is also is having a go at cinema but not at something as esoteric as cinema vérité; this is more of an ode to the death of the Hollywood system, whether the producer was aware of it or not.

The film opens with a magician (Garry Goodrow) who wanders the wasteland on his motorbike that is packed with all of the essential vestiges of a world long since destroyed: Comic books, porno, maps, and more which he shows to a group of survivors, including the titular, Glen and Randa. Fueled by his recent finds, a Wonder Woman comic and a map of Idaho, Glen (Steve Curry) drags his apathetic and pregnant mate Randa (the lovely Shelley Plimpton from “Putney Swope”) and a horse like the figures of a lost western through the treacherous forest and mountains to the sea in search of the mythical city of Metropolis described in his comic he carries. The pair eventually reaches the ocean where they meet Sidney (played by Woodrow Chambliss) who gives them shelter (with his wife’s skeleton inside, but it’s the apocalypse so what can you do?), so Randa can give birth. Sidney regales Glen and Randa with stories from the past and even goes as far as to point to the sea in the same way that Charlton Heston would glance at a submerged Statue of Liberty uttering the line, “Howard Hawks owned all the land in there. He grew the best potatoes in Idaho,” an obvious slam by McBride and his writing partner Rudy Wurlitzer, who that same year had also penned the equally elegiac “Two Lane Blacktop,” on the current unimaginative sad state of Hollywood storytelling in the face of its once glorious past.

Similar to “Two Lane Blacktop” much of “Glen and Randa” flows without dramatic intensity as it seems more than happy to give you a meandering plotline that is punctuated with small visual jabs at Hollywood and the awesome character of Sidney, who becomes the most enjoyable part of McBride’s whimsical film. Steve Curry does a decent enough job as the wide-eyed dreamer Glen, but he is limited by his obnoxiously boyish/hippyish dialog that makes him more of an optimistic fool than probably intended by McBride and Wurlitzer’s script. Another unavoidable failing of this film that fits its era is the unjustified X-Rating it received, which places it in the company of a slew of other mainstream films during that era such as “Midnight Cowboy” and “Fritz The Cat” that rode the “X,” except that the latter two films reached a level of popularity that most films given the mark of shame could not replicate. What Jim McBride does particularly well with “Glen and Randa” is its tongue in cheek delivery of what the Hollywood system was wanting while simultaneously showing Hollywood everything that was missing after the fall of the studio system.

Original Trailer For Glen and Randa

Though “Glen and Randa” was not huge box office hit for Sidney Grazier ( I assume the character of Sidney was ironically named after him), who had just successfully produced Woody Allen’s “Take The Money and Run” and Mel Brooks’ “The Producers,” he must’ve been somewhat pleased with the results when Time Magazine picked “Glen and Randa” as one of the top ten films of 1971, helping it to make a small profit on its $500,000 investment. With more films being produced like “Glen and Randa,” it was clear that Hollywood wouldn’t be casually investing on the Cleopatra scale anymore, but it would soon be bailed out by a generation of forward thinking filmmakers who would tell stories in the way that would be more in line with their generation, as opposed to picking through potato fields that had had long since been washed up.