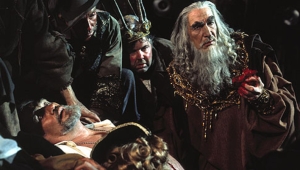 Oh Dear, a Bit More Than a “Pound Of Flesh”

I guess I have always loved Vincent Price in the same way that so many others do: in the ghoulish Edgar Allen Poe reciting kind of way.  Even we fans of Mr. Price sometimes forget that he didn’t start in films that dripped blood. Sure, early on, he starred in a few horror films such as “Tower of London” with Karloff in 1939 and in “The Invisible Man Returns” in 1940, but Vincent was also an exceptional character actor in film noirs like Otto Preminger’s Academy Award winning “Laura” and “The Web,” starring against Edmund O’Brien. Things changed for Vincent after 1953 when “House of Wax” became a huge hit in the middle of the 3-D fad, and then it was almost all horror after that with the success of “The Fly” and of course “The Return of The Fly” and many more Hollywood horror films from that decade. Come the 1960s and Roger Corman getting his hands on Price for AIP,  Price was locked into a feast on the terror train as he made several adaptations of the aforementioned Poe with Corman including, “The Pit and The Pendulum,” “The Masque of the Red Death,” and “The Raven.” In fact Vincent and Roger made no less than eight adaptations of Poe’s work, all fairly low budget but always coming in above expectations courtesy of Price in the lead. I have often wondered if Vincent enjoyed being the king of horror as so many people have called him over the years.  After all, Price studied Fine Arts at the University of London and began his stage career in Orson Welles’ Mercury Theatre, so when I heard that he attempts Shakespeare in “Theatre Of Blood,” I was intrigued. Could Price go back to his roots and perform Shakespeare on screen after almost forty years of stabbing zombies? Well, I am thrilled to write “yes,” but you know that Shakespeare with Vincent Price is going to come with a bit of deliberately served ham and a hefty body count.

Price plays Edward Lionheart, a “serious” actor who attempts suicide by diving into the Thames but is secretly rescued by a pack of riverside hobos. Lionheart’s suicide attempt comes after an evening when he is humiliated by The London Theatre Critics Circle who trash a series of Shakespearean plays that he has just produced, and as far as the theatre community is concerned, Lionheart jumped to his death and is nevermore. With his death a fabrication, our thespian Edward, like so many of the heroes contained in Bill Shakespeare’s works is craving revenge and, with his newfound homeless friends in tow as his band of brothers, sets on the critics who have scorned him by giving them a performance of “The Bard” that they will never forget because it will be the last thing they will ever see. You see, Edward isn’t going to give them a humorous scene from “Twelfth Night” or “Much Ado About Nothing.” No, when Edward performs a scene from “The Merchant Of Venice,” he will bring in our critic and actually take his “pound of flesh” in this translation as payment for the bad reviews that he has always received from his now kidnapped critics in some fairly graphic scenes that come to life in a way that I’m sure would’ve made even Shakespeare himself shudder a bit. The plays are then acted out for Lionheart’s most attentive audience of all, The Theatre of Blood which is his adorning collection of tramps.

Yes, all of your favorite Shakespearean nasties are here for you to witness in living color. One envious critic is conned by Lionheart into murdering his wife just like Othello murders his bride Desdemona. Another critic gets the Julius Caesar Ides of March treatment in the form of a dozen knife-wielding hobos. An alcoholic critic is drowned in a vat of wine and dragged through a cemetery by wild horses à la Richard III. With the bodies of the recently critical reviewers piling up and armed with the suspicion that our non-dead thespian might be behind the killings, our comical Inspector Boot (Milo O’Shea) and Sergeant Dogge (Eric Sykes) scour the streets of London to locate Lionheart, starting with his faithful daughter, Edwina (an always fetching Diana Rigg), a make-up artist. She is defiant in the face of the law which isn’t a surprise as she is in league with her father and his artistic vendetta. Alas, she convinces the last surviving critic to visit the Theatre Of Blood, setting up the final scene of demented pathos.

Original Trailer For Theatre Of Blood

Director Douglas Hickox commands the entirety of the film with a bold vigor and rarely matched lunacy and comedy that keeps the narrative flowing with ease. The scenes of gore are, again, a bit tough to take at points, but those moments are needed to push the comedic back into the horrific. Riggs, O’ Shea, and Sykes are wonderful in their supporting roles, but this truly is the role that Vincent Price was born to play. Outside of the gory mayhem that only the haunting Price could bask in unlike no other, there are the many moments of joy that seem to fly out of Price when performing the myriad of Shakespearean characters that he must play in “Theatre Of Blood.” I had to check myself to see if what I was witnessing was an Edward Lionheart, who gleefully has finally found the audience he was always looking for, or screen actor Vincent Price, who finally gets to read soliloquies that he has always dreamed of performing on screen, even if they are played for a laugh and with some amount of cinematic blood on his hands.