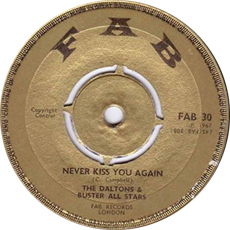 Well Daltons, Don’t Do It Then!

A prized tradition during the almost twenty year run of Generoso And Lily’s Bovine Ska And Rocksteady from when it was started was the Annual Anti-Valentine’s Day. This is where I, Generoso, would play two hours of songs featuring sets dedicated to many maladies associated with love like the pain breaking up, revenge, sadness, rejection…Yep, you get the picture.  These sets would be combined with dire facts relating to love like the current divorce rate and the costs of such splits and stories, many sent in by listeners, that regale accounts of tragic relationships from blind dates to the end of thirty year marriages. Fun!

Why would I do this, a now happily married man take such an assault on the saccharin, greeting card created holiday that ruins couplings both young and old?  Well, you got part of the answer there but the other part consists of feelings held by the long term committed bachelor that I was prior to meeting my lifelong cohost Lily.  You see, I had seven relationships in my past life as a single end between the first and fourteenth of February with three ending on the very saint’s feast day. Coincidence, no I don’t think so as this “holiday” puts an unneeded pressure on relationships as the kind of gift/evening is contingent on the current duration/affection amount of the union.  For example, let’s say that you have been dating for two weeks when the dreaded Cupid Day occurs…What amount of buy in are you supposed to have? If you do too much, it may make a more sensible partner run from level jumping and not enough pageantry might convince the more romantic partner that they are not the intended apple of your eye.

Hence, Valentine’s Day is the giant foot stamping on the flower of budding romance.

The 2016 year’s Anti-Valentine’s Day Show selected sets based on the following moments of a doomed relationship in a chronological breakup order…The FOOL set which normally occurs during the Valentine’s Day preparation that leads to failure, the set that highlights the moments when you let that love GO, the music assembled for the times when you realize that they are GONE. The subsequent set of songs about HEARTACHES when you start to notice that your love is no longer sitting with you on the couch.  As you stare at the empty couch, you begin to feel SORRY for messing it all up which forces you to sadly REMEMBER all of the good times you had as opposed to moments like when she opened up your Valentine’s Day present and called you an asshole for getting her a set of car air fresheners because you thought that it would be funny to remind her that her car smell like an old man’s armpit (I thought she would think it was funny).

So, you can now profit from my years of pain and listen to a superbly curated Anti Valentine’s Day Radio Show that features top ska, rocksteady, and reggae by such artists as The Heptones, Alton Ellis, Bob Andy and many more in the comfort and safety of your own home via Mixcloud.