With a new year always comes new goals. We have whirred past a month and a half of 2016, and this year, I am committed to digging deeper into the physical and digital shelves of the comics world to find the unexpected. As a result, I’ll try my best to veer away from the major independent publishers here on this blog, with the exception of works that I just cannot pass up, in the hopes of excavating works that strive for something bolder, be it by a visual style, a narrative structure, or a subject.

In this quest, after a bit of searching, I’m happy to present a review for Sarah Horrocks’s The Leopard.

Alluring Cover for Volume 1 of The Leopard

Sure, a cover never tells a full story, but sometimes a cover strikes you and forces you to peek inside. After spending a couple of hours searching through various online comics providers only to find too many recycled genre motifs and archetypes (vampires are over, zombies are fading, time travel is an overused method of transportation across story arcs…), I saw the cover for volume two of The Leopard and a description which included the term “giallo”and was instantly intrigued.

From a premise perspective, nothing in the basic plot of The Leopard is out of the ordinary. The matriarch of a wealthy family lies on her deathbed, and her offspring return to their childhood home to determine the fate of the family’s riches. As expected, the children despise each other, united only in their hate for their mother and their thirst for fortune, and consequently, when all of the siblings must remain in the same place for more than an hour, nothing good will come from the bonding time. The warring wealthy family is not a foreign theme in media; from Antigone to Dallas to You’re Next, family members have battled and killed each other over inheritances and power for thousands of years, regardless of changes in society, so the family of The Leopard does not experience an unfamiliar conflict to any reader; however, the art and the development of the different characters involved distinguish The Leopard from other family dramas and horror stories, creating a visually fascinating and psychedelic mystery that pays homage to Dario Argento, Mario Bava, and Andrzej Żuławski along with, of course, Luchino Visconti and his film that shares the same name as this series.

Given the clear inspiration from three filmmakers with outstanding and unique visual styles, Horrocks, like the three mentioned above, persistently experiments with the visual style on her medium. Every page of the the first three volumes of The Leopard presents something surprising, and while some ideas work better than others, every single page demands extra study and admiration. In The Leopard, you will find piercing color combinations, collage, and even some radial paneling, all of which help to create an appropriately ominous and disorienting mood for the sinister deeds on the horizon. While at points, the art may exceed the complexity of the story, it never takes over and makes The Leopard just a collection of artwork; every visual detail has a role in conveying the motivations and personas of each character, and this is the strongest feature of Horrocks’s style as a creator. 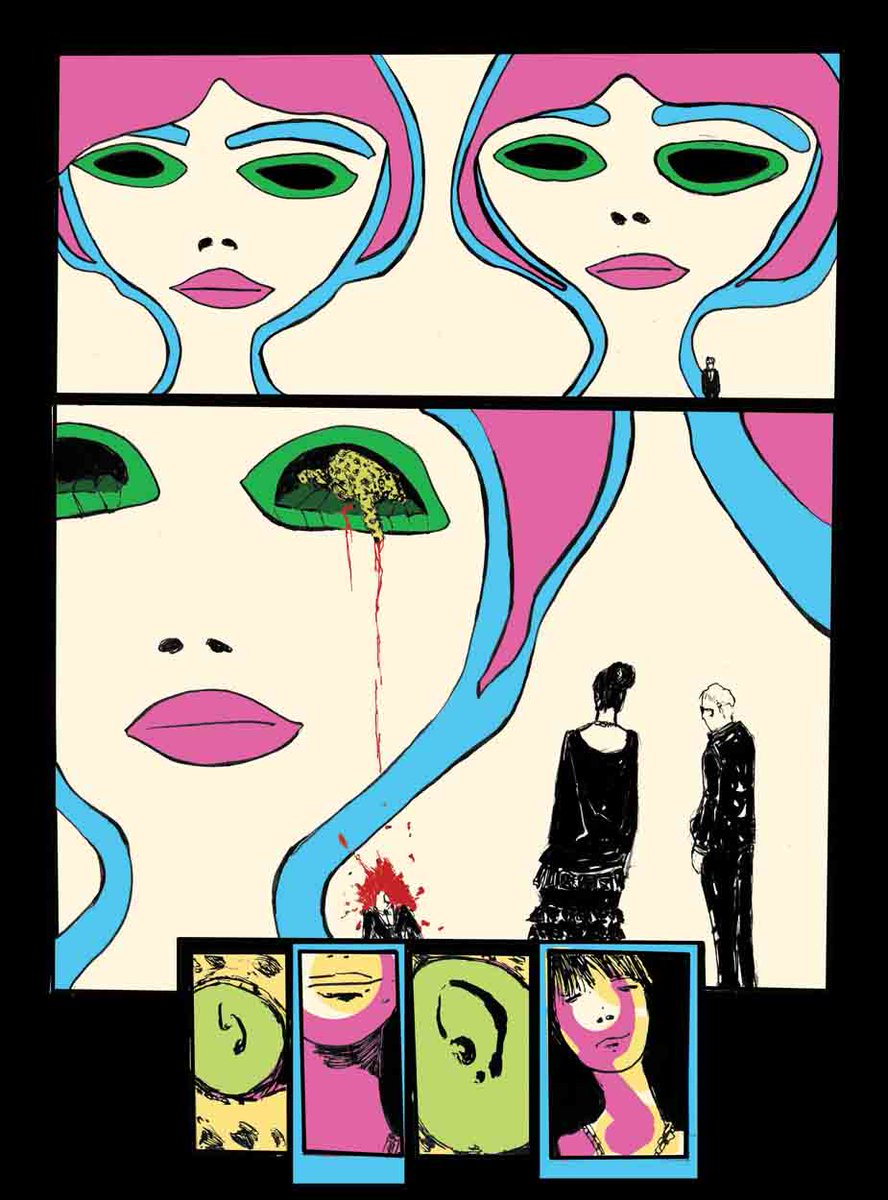 To emphasize themes and ideas in horror, The Leopard and the comics paired with each volume have rich references to brilliant works and iconic images for any cineaste. Horrocks alludes to the in-shower eye gouging of Fulci’s Zombi, Isabelle Adjani’s disconcerting lovemaking with a tentacled creature in Żuławski’s Posession, and the ballet school of Argento’s Suspiria in her work here, conveying her own inspiration in visual storytelling and connecting the reader to the tones and moods of these works. While I was excited to see any reference to Żuławski, these specific allusions somewhat hurt the success of the comics. Horrocks already has her own strong style that blends influences from giallo, horror, and experimental film, so the inclusion of nearly exact ideas from the works that inspire her as allusions or homage distract your focus from the characters, the story, and the artwork of the comics because you leave Horrocks’s world that she has meticulously created to think about the work of other creators that are somewhat but not entirely connected to The Leopard.

While The Leopard absolutely contains deeply embedded cues from cinema in its storytelling, the overall aesthetic of the series has a starkness and grotesque nature much like the artists of the Die Brücke group. The sharp color combinations of the pages form images that are unified but also jarring, severe, and fantastic, much like the work of Kirschner. And in a similar stylistic vein, the family members have exaggerated forms that make them appear more like demons than people, which, based on their personas as the series progresses, makes sense, for none of their ugliness lies internally; the hideousness presents its plumage on the faces and figures of the characters and reinforces the incorporation of German Expressionist visual concepts.

With such a distinctive combination of styles, Horrocks proves her awareness in her own work in addition to her unconventional (by comics standards, at least) sources of inspiration. In turn, The Leopard aims for far more than your traditional comic, and though at times, the influences slightly overwhelm the series (after all, it’s a great challenge to incorporate stalwarts of Western art and cinema), all of the diligence to create a new and daring comics reading experience shows itself on the pages.

Currently only available in digital format, this is one of the first digital comics I really wished I had in print, and for that statement alone, The Leopard should be on your reading list as soon as possible; I suspect Horrocks will have even more to admire and astonish in future volumes, and you will want to be there for the extravaganza.

The Leopard is written and illustrated by Sarah Horrocks. It is available via Gumroad here.