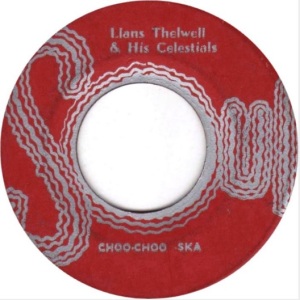 A Jolly Ska From Llans Thelwell on SOUL

The February 23rd, 2016 Bovine Ska and Rocksteady began with two sets of smooth rare rocksteady beginning with a fine release on Buster’s Olive Blossom imprint that featured a duet between Buster and Larry Marshall from 1967 entitled Broken Heart.  After our weekly mento set that included woeful Rent Worries from Chin’s Calypso Sextet we launched into the ska to get ready for the spotlight on Byron Lee’s SOUL Label.

In looking for this week’s spotlight, we realized that while we still have more ground to cover with Duke Reid, Coxsone Dodd, Prince Buster, and the Pottingers, we have missed one other major and prolific producers of Jamaican music: Byron Lee.

Born in Christiana in Manchester Parish, Byron Lee received his first introduction to music from the Jonkunoo and Bruckins dances which his family practiced, being that though his father was from Hong Kong, his mother was from Auchtembeddie in the same parish. At the age of eight, the Lee family moved to Kingston, and he attended the Mount St. Joseph’s Catholic school. Here, he was introduced to music in a more formal way; he took music lessons and learned piano from a nun who offered them as a deterrent from teasing and giving the girls at school a hard time.

By the time college came around, Lee’s music took a backburner to football, where he thrived. But, after a win, the college had a dance and needed a band, and music returned into his life when he formed a band to perform at the event. A year after this fortuitous reacquaintance with music, the Dragonaires formed with Byron playing bass and serving as band leader.

They first worked with Edward Seaga for their recordings and with Ronnie Nasralla, the future owner of BMN records which the Dragonaires would record at later, as the manager of the group. During these years, Lee quickly emerged as a producer and arranger. Over the course of his prolific career, Lee would have many labels including our favorites, Tiger and Jaguar.

One of the earlier labels in Lee’s recording stable was Soul, a ska label, and the subject of our spotlight tonight. We kicked off the spotlight with Keith Lyn and Ken Lazarus backed up by the Dragonaires on “I Don’t Love You Anymore,” a track off of the original Come Fly With Lee LP.

In addition to Byron Lee and The Dragonaires, there was another backing band for the Soul label: Llans Thelwell and his Celestials. The line up for the Celestials was:

For news on the upcoming spotlights and fun discoveries tied to early Jamaican music, join the group for the Bovine Ska and Rocksteady on Facebook.