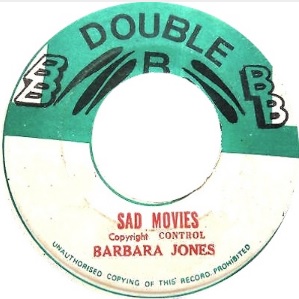 Barbara Jones cut her first tune for Double B!

Lily and I were super excited after dancing to a fantastic set of original reggae and ska from David Hillyard and The Rocksteady Seven at La Cita on Friday night that we went home at 1AM and began pulling a massive Bovine Ska and Rocksteady for May 17th! Sure, we were a bit danced out, but we still grabbed some killer tracks for you, beginning with two sets of ska which started with Lee “Scratch” Perry’s anti-Prince Buster tune for the N&D Label in 1963, Don’t Copy!  Our second set of ska began with a version to version of Count Ossie and The Upsetters’ ( the vocal group, not the Lee Perry backing band) Studio One gem, Turn Me On, which was followed by the version from Rolando Alphonso, also on Studio One in 1965, Tall In The Saddle.

A mento set followed with Percy Dixon and His Merry Boys leading the way with their version of the naughty, Ben o Dict.  We ended the first hour with rocksteady to get you in the mood for the DOUBLE B Label spotlight.  Part of that rocksteady set had a tune  from beautiful voice of Ken Parker, from the DOUBLE D Label which has nothing to do with your spotlight label, DOUBLE B, called The Search Is Over from 1968.  Yes, we did that just to confuse you.  Soon, we were off to do the DOUBLE B Label spotlight! Major props to Lily for doing the research on this one as there is very little known about this small, but vital label.

The Double B label existed from 1972 to 1975, and all of the records were produced in Jamaica and based on the early releases and the name of the label, we have reason to believe that the owner of the label was Baba Brooks.  Baba Brooks produced the debut single for Double D, and then most of the remaining productions were created by vocalist Glen Lee.  We began the label spotlight, with Barbara Jones’s Sad Movies, followed by Sir Harry’s version of the track, both produced by Baba Brooks. Sad Movies is a cover of Sue Thompson’s track of the same name from 1961, which went to #5 on the American Billboard charts. Sad Movies is also Barbara Jones’s debut recording.

As mentioned in the introduction, Glen Lee was both a vocalist and a producer. He recorded as a singer for Double B as he produced other artists. In the early 70s, he would gain further notability as a producer for his work with George Faith. And Glen Lee’s recording studio was not too far from Lee Scratch Perry’s record shop, and this proximity would facilitate the beginning of Lee Scratch Perry’s collaboration with George Faith.  We hope you enjoy the spotlight!

For news on the upcoming spotlights and fun discoveries tied to early Jamaican music, join the group for the Bovine Ska and Rocksteady on Facebook.

Here is the May 17th, 2016 Bovine Ska and Rocksteady Radio Show.  Please share!