Given the recent success of Bernardo Bertolucci’s latest film, “Me and You,” the story of a bourgeois boy who spends a few days locked away with his gorgeous junkie half-sister while hiding from his overbearing mother in the basement of this condominium, it immediately brought to mind Bernardo’s controversial 1979 film of incest, “Luna.” “Luna” was ripped apart by the critics in 1979 and was even sermonized during a Sunday service at my local church, which, of course, made me want to leave immediately and see the film myself.

I originally didn’t see “Luna” in the most ideal way, with my elderly Italian-Catholic father in a downtown Philadelphia theater. Pa also had it in a bit for Bernardo as my dad was a proud fascist who hated Alberto Moravia, who had written the book that Bertolucci’s “The Conformist” was based on and thus despised the film. Regardless, as Dad was sweet about most things and would on my request see just about anything except for science fiction, we went to see the film at the old Ritz Theater. Let’s just say that when Luna was over, pa was not pleased. Translating from Italian, he called the film “sensationalistic garbage.” With all respect to my father, I didn’t agree with him then, but I’m not sure that it needed to be seen again.

Watching “Luna” again recently, I was immediately struck by the beautiful photography of Vittorio Storaro, who that same year had lensed Coppola’s “Apocalypse Now.” Storaro had been working with Bertolucci since they collaborated on the aforementioned “Conformist” and for his time,was the finest cinematographer on earth. Much can also be said for Jill Clayburgh, the star of “Luna,” an exceptional actress throughout the 1970s, who a year earlier had shined in the equally controversial Paul Mazursky film, “An Unmarried Woman.” Clayburgh, it has been rumored, relished the opportunity to work with Bertolucci and truly does the most she can with what was given to her and turns in a fine performance. As for Bertolucci; he was on quite the roll, from his first film in 1962, The Grim Reaper, through the 60s and 1970s, and although he had stumbled a bit in his 1976 film, “1900,” he had won every conceivable accolade possible for “Last Tango In Paris,” “Love and Anger,” and “Partners.”

So, what went wrong?

Let’s start with the story and dialog of the film, co-written by Bertolucci, his brother Giuseppe, and his wife Clare Peploe, which has no desire to either fully ground itself to reality or to allow the operatic style drama of the piece to flourish into a surrealistic experience. The story goes like this; Caterina Silveri (Clayburgh) is a wealthy opera singer who is married Douglas Winter (Fred Gwynne), and they have an erratic bratty teenage son named Joe (Matthew Berry). Together they all live happily in their New York townhouse until dad dies suddenly which makes mom whisks Joe and herself off to Italy to grow her career. Once in Italy, Caterina’s career flourishes in grand opera, while Joe becomes more bitchy, chatty, and erratic. He appears to worship his mother in an almost romantic fashion but of course, treats her like crap whenever he can, which in some ways is very Italian Catholic, but these people are supposed to be Americans, so what gives here? This character flaw is the beginning of the many issues that I have with “Luna” as I am not sure that Bernardo ever wants this to be an American family.

Joe follows this behavior by experimenting with hetero sex, gay sex, and of course heroin, a fact that his mother discovers during a somewhat hedonistic birthday party for Joe. Once Caterina discovers that little Joe is on the horse, she breaks out into full maternal mode, abandoning all and even buying a fix for Joe once his dealer Mustafa leaves town. This culminates in one “key” scene when Joe forks his arm in frustration when he runs out of needles for his fix. Even more bitchy and obnoxious, Joe is inconsolable, so mom kisses and masturbates him to climax, until he falls into a peaceful junkie sleep. This scene provides another moment of frustration for me as Caterina’s somewhat maternal but sexual reaction to Joe’s junkie freak-out is as believable as Joe even being able to get an erection while strung out. If given the stylistic context of an opera, these mistakes would be taken in as operatic license but here they just appear confused as to what they want to portray.

At this point, we aren’t sure where Joe’s addiction stands, but Caterina decides to pull Joe into the country to trace back the time when she met Joe’s father. You see, unknown to Joe, Douglas was not his biological father, so Caterina, after another few rest stops that lead to even more moments of sexual uncertainty, leads Joe to Giuseppe (Tomas Milian), a poor, country elementary school teacher, who is loved but still lives in the town where they met. Perhaps what Bernardo is saying here is that Caterina wanted more than just being a mom, so she was off to America where she has always denied who she really loved and has now brought those hidden desires to her son. Sure, there are moments when we see that Joe and Giuseppe have accidentally dressed the same, but that’s all Bernardo is going to give you to draw that conclusion. Once everything is out in the open, the film bizarrely culminates in an outdoor performance of Verdi’s “Un Balla in Maschera.”  If you are looking for a connection between Verdi’s three act opera and the story of “Luna,” I will save you some trouble.  There isn’t one, and this pseudo operatic tale of tragedy and regret is now over.  Not surprisingly, the critics of that time seemed more concerned with the audacity of the film, but they should have been more upset at its lack of focus.

The good news is that with 2014’s “Me and You,” Bertolucci has corrected the mistakes of “Luna” by allowing his characters’ dialog to speak for their broken realities and not by forcing them into constant over the top moments of dire melodramatics.   It is a film that is grounded in reality but is no less dramatic (or beautiful for that matter) for its choice of narrative style. Lorenzo, the struggling adolescent in “Me and You,” is selfish and callow in his actions at first, but once he understands the causes of his inner turmoil through the ranting of Olivia, his economically trapped roommate and junkie sister, he is free and able to leave the basement with peace. Though there are suggestions of possible intimacy between Lorenzo and Olivia, Bertolucci sidesteps those moments and does not allow for a physical encounter to happen, which is an excellent decision for a film that has chosen the ground for launching its familial drama. So what if it took 35 years for this to happen, I was thrilled that Bernardo was able to pull it off right this time.

By 1984, Scottish director Bill Forsyth was getting quite a bit of notice here in the States. His second film released here in 1981, was a painfully funny and sweet coming of age story called “Gregory’s Girl,” which achieved critical, if not commercial success. Local Hero, his second film, and an art house favorite from 1983 starring Burt Lancaster, remains one of the classic quirky, dry comedies of that decade.   So, in 1984, I, like so many other fans of his work were wondering…What was Bill Forsyth’s debut film like? Much to my delight, a limited release of “That Sinking Feeling” premiered in Philadelphia in 1984 at Sansom Street’s Roxy Theater, which meant I immediately had to go see it after school that Friday.

“That Sinking Feeling” begins with the tagline, “The action of this film takes place in a fictitious town called Glasgow. Any resemblance to any real city called Glasgow is purely coincidental.” Truly, Glasgow seems a dreary, sad place in the late 1970s or at least the “Glasgow” depicted by our Mr. Forsyth, as our hero Ronnie (played by Robert Buchanan who would later portray Gregory’s close friend in Gregory’s Girl) is quite down about his inhabitance of this particular “Glasgow.” So much so, that he tries to commit suicide by drowning himself (with a bowl of cornflakes of course) which after he fails in achieving that small task, propels him into the idea that there might be another way out.   He proposes to his friends Vic and Wal the idea of a burglary involving the theft of many stainless steel sinks to bring in much needed cash. They are so broke that even the paltry sum of 45 pence for a burger and coffee seem galaxies out of their grasp.

BFI Trailer for “That Sinking Feeling”

In the formation of their master plan is the gathering of their crew, most specifically their friend Bobby, who will make a drug that will allow them to obtain a vehicle for their crime and a little boy called the “Wee Man.” The plot saunters forward with the usual quirky pace of any Forsyth film, allowing you to pick up the odd character or two with the plot almost becoming secondary to the small moments that Forsyth does so brilliantly in later films. The red jogger who comes through scene after scene without any backstory or explanation is reminiscent of the phantom dirt bike racer in “Local Hero” who seems to appear just to remind the viewer that there is a reality of some sort existing outside of Forsyth’s lackadaisical but always entertaining plot.

As the film progresses, we do not see a Bressonian attention to criminal techniques, what we do see is a dozen or so maneuvers that will have you have you laughing sideways. From Bobby’s over doping of a bakery truck driver, to Vic, who gets into drag every night to sexually lure the night watchman into distraction. You won’t go more than a few minutes in “That Sinking Feeling” without a moment of pure Forsyth silly invention made real by his clever actors, who were selected directly from the Glasgow Youth Theater and who would be again be thrust into service in “Gregory’s Girl.” 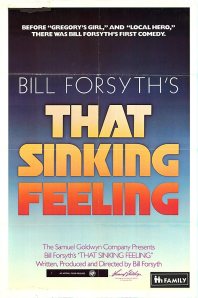 Though only given a small release back in 1984, one has to wonder if a young Wes Anderson had watched this film as he was writing “Bottle Rocket,” Wes’s debut film. “Bottle Rocket” is also the story of a group of hapless, lost young people who are using crime as a means of escape. Though “That Sinking Feeling’s” Ronnie, Vic, and Wal kind of need the money a bit more than just something to give them an identity, it still means a same outcome in terms of a good laugh at a group of likable boys who are trying to escape their youth by going for whatever they can steal.

Forsyth himself would revisit this theme of youthful clueless thievery in his hysterical, and also overlooked, 1989 film “Breaking In,” his next to last American film and one that contains an Oscar-worthy performance from Burt Reynolds and a punchy script co-written by Forsyth and John Sayles.  I so wish Forsyth had continued making crime films, because as perhaps, as his character Eddie suggests to his young cohort in “Breaking In”,…“You may have some larceny in your blood, kid.”