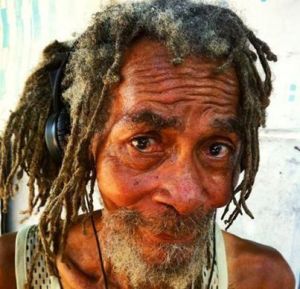 We are again saddened by the passing of another Jamaican legend, Jackie Bernard, the lead singer and founder of the seminal vocal group, The Kingstonians.  Jackie had fallen on hard times over the last decade and according to Jackie’s sister, Monica Bernard-Kelly, Jackie passed away from a pneumonia at the Kingston Public Hospital on Sept 14th.   Rafael Ruiz, a Spaniard living in Jamaica, began a foundation in January of 2014 for Jackie, who had been diagnosed with diabetes and was struggling to afford medication and treatment to battle his disease and Jackie was living in an unfurnished one room house in Maxfield, Kingston. The foundation was able to help improve his living conditions and help him get better medical attention, and for that we are grateful and send much respect to everyone involved in the Jackie Bernard Foundation.

The Kingstonians were founded in 1966 by Jackie Bernard and his brother Footy, along with their friend Lloyd Kerr, who originally recorded under the name, The Apostles, for Derrick Harriot’s Move and Groove Label, but that was short lived.  As the Kingstonians, they saw early success at JJ Johnson’s JJ label, but would continue to record for other producers as well, including Coxone Dodd, Leslie Kong, and again with Derrick Harriott.  With Harriot, they released a compilation of singles in 1970 under the album titled, Sufferer, which was the record that heightened the success of the trio. Sufferer gained much popularity in England, where it was released and distributed by the Trojan label.  After finding success with Derrick Harriot, they would return to JJ, who was also having great success with another stellar vocal group, The Ethiopians.  Over the next ten years of the 70s, Jackie Bernard would record as both a solo artist and with his fellow Kingstonians for his own Stun King label, where he would arrange and produce his own work with the writing support of his brother Footy.

On the September 17th edition of the Bovine Ska, we presented Jackie’s best work with the Kingstonians, along with his impressive solo releases to help give you an understanding of the immense talent that Jackie was.  R.I.P. Jackie.

Listen to the full spotlight and the show via the WMBR archives here:   LISTEN HERE