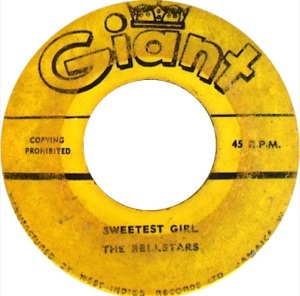 Roy Panton and Cornell Campbell as The Bellstars

A triple version of Delano Stewart’s That’s Life, a pretty 1968 tune for Sonia Pottinger’s High Note is how we commenced the August 16th, 2016 Bovine Ska and Rocksteady.   We continued the with another set of early reggae that ended with Leonard Wilson’s 1975 track for Mighty Cloud, I Want To Thank You and the version by The Mighty Cloud Band, Thank You Instrumental.  We thought to go with an uptown mento sound for this week’s mento set…Baba Motta’s Jamaica Talk , Tony Johnson and His Carousel Band’s Give Her Banana, and  Clyde Hoyt and George Moxey Quartet’s Montego Calypso.   To end the first hour, a long set of rare ska to get you ready for the ska of King Edward’s Giant Label that ended with The Originators,  Chelip Chelip, which was released on SEP in 1966.  It was then off to the spotlight…

Vincent ‘King Edwards’ began his career as a sound system operator with his brother George. Vincent traveled to America in 1954 and brought back records and the equipment for a sound system. Upon his return to Jamaica, Vincent and George opened up the Rock and Roll soundsystem, but the first dance did not go well, and Vincent and his brother George took some time to improve the soundsystem. Rock and Roll returned to the scene in 1956, and immediately started to be called the Edwards Sound. Shortly thereafter, King was added to the sound system name, emerging as the King Edwards soundsystem. Vincent would get exclusive records from artists in America, specifically Philadelphia where his sister lived and from the south where, giving the King Edwards soundsystem an edge that would append ‘The Giant’ onto the name.

Like many other sound system operators, the Edwards brothers would play primarily American soul and R&B, but as the 60s arrived, they began recording acetates in Jamaica customized for his soundsystem, and that led to a natural transition into recording and releasing records for the public in the early 1960s. There is of course the flagship label that many know of: The King Edwards label, but here on the Bovine Ska, we wanted to spotlight a label that was the other part of the soundsystem name, and that is The Giant label.

Vin and George Edwards were extremely active throughout ska, but the label stopped releasing records as rocksteady and by the early 70s the soundsystem completely closed it doors. A few factors played into this: Vin’s interest shifted toward on politics; he served as a Councillor and then became a member of parliament. He was also getting into horse training, which is something he still does today. George moved to the countryside of Jamaica, away from the city and the music scene. Furthermore, Vin was not a marijuana smoker (nor an alcohol drinker), and after a while the rampant smoking that would occur in the studios made the music business difficult for Vin.

Please let us know if you enjoy the August 16th, 2016 Bovine Ska and Rocksteady: