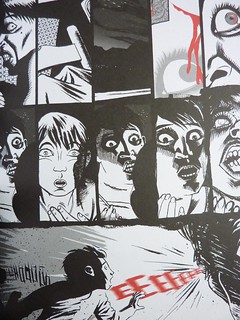 Alan Bates and Susannah York in “The Shout”

I first saw Jerzy Skolimowski’s “The Shout” as part of the Harvard Film Archive’s sensational retrospective of the fifty plus year career of the famed Polish director and screenwriter of Roman Polanski’s “Knife In The Water.” “The Shout” is a faithful and visually stunning adaption of a short story written by poet Robert Graves, and of all the films that were shown during that retrospective back in 2010, it was the one film that left the greatest impression on me, even to this day.

A supernatural thriller shot with a non-linear narrative, “The Shout” uses a cricket match at a mental institution as its framing device. In the eerily scenic yards of the institution, we have Crossley (Alan Bates) a newly arrived mental patient who sits in a small shack besides a foppish, coiffed man named Robert (Tim Curry) who Crossley assists in scoring the match that features a team of loons. Shortly after Crossley’s ranting, we soon meet the charming young couple, Rachel and Anthony Fielding (Susannah York and John Hurt) who have domesticated themselves into an almost brother and sister relationship, devoid of any carnality. We first meet them at the nearby beach where they vividly imagine a man armed only with a sharp bone, coming towards him in a threatening manner. Somewhat flustered, the Fieldings saunter back to their idyllic country home in Devon, England where Richard composes experimental music by mostly capturing the sounds of nature and distorting them as he sees fit. Though Richard composes secular music, he is also the local church’s organist and despite his vicar’s plea for a resurgence of faith during Sunday services, Richard will leave the church for an illicit tryst with the wife of the local cobbler, but before he does, he will encounter Crossley.

Crossley sneaks up on Richard and immediately addresses the concept of the Christian soul and how it is “imprisoned by the body.” He then asks, “if imprisoned, wouldn’t the soul be better off inside of a tree?” Richard takes leave of Crossley but returns home to find him sitting in front of his house, looking for an invitation to lunch. Richard complies and soon Crossley will make his stay last much longer than anyone had hoped for.

During the subsequent lunch, Crossley regales our pastoral couple with tales of his Aboriginal life, his bride, and the murder of his own children, which he claims is a perfectly acceptable tradition for the Aborigines, but this fact does not go over well with the Fieldings, nor does Crossley’s story of female possession that can easily occur by the keeping an item of a women’s wardrobe. It seems that Crossley has found Rachel’s shoe buckle and with that discovery, his Svengaliesque inclusion into the Fielding’s lives has begun. Our Crossley also has confided in Richard his unnatural ability to shout a sound so powerful that it will kill all around it. Richard of course needs proof and follows Crossley to the same beach where he and his wife imagined the Aborigine coming towards them. Crossley does shout and all life around him suffers for it; he is an actual force of nature, and soon, he will take his possession of Rachel in the same way he controls his surroundings.

Director Skolimowski does an excellent job at keeping the identity of Crossley a secret, allowing the viewers to draw their own conclusions, adding to the thrill. Is he an Aboriginal shaman, in line with the powers of nature? Or is Crossley in congress with the devil aiming at the possessions of the Fielding’s souls? Or is his entire existence the ramblings of a mental patient? The simple fact is that it doesn’t matter how he (Crossley) goes about affecting those around him; it is why, which may come down to the basic idea of the conflict that occurs inside the character of Richard, an opportunist who seems content to distort nature with his recordings, his masculinity with his desire for domestication, and similarly his non-secular morality with his infidelity against his wife, Rachel. Skolimowski alludes to these transgressions in both the natural and spiritual world, leading to a conclusion that is a sort of Biblical punishment for those who defy both the kingdom of God and mother nature’s reaction with the film’s loudest “shout” being created outside of Crossley’s human body.

Given the critical acclaim of Skolimowski’s earlier work and the author of the source material for “The Shout,” it should come as no surprise that the film version of the Graves short story would draw the immense talent it did, hitting the screen with the prime acting abilities of York, Bates, and Hurt as well as the fearless cinematography of Mike Malloy, whose imaginative visuals add much to the stark moments of natural conflict. Reviews of the “The Shout” at the time of its release vacillated between an overall dislike to overwhelming praise, which is best thing you can say about any great work of art as to how it effects people. “The Shout” did share the Grand Prize that year at Cannes with another misunderstood film of its era, Marco Ferreri’s ode to fading masculinity by way of the destruction of the natural world, “Bye Bye Monkey.”  I guessed people actually cared about an environment and its bond to masculinity during that decade.