Reggae By Bus a.k.a. Reggae Sunsplash

After over nineteen years of producing the Bovine Ska and Rocksteady Radio Show and being a lifelong Jamaican music fan, I am still amazed that I come across the occasional ska or reggae single that I have never heard of before, much less a full documentary. Though the island was producing hundreds of records a month during the latter half of the era that my show covers (1955-1975), Jamaica is still a geographically small island with a population a bit under three million people. Much was done by Jamaican citizens to preserve the music and culture on vinyl and film, but on many occasions, foreign directors and producers arrived on the island to capture the finest artistic moments. Such is the case with German-born director Stefan Paul, who is most noted for directing two well-known Bob Marley concert films, Bob Marley: Live In Concert and Bob Marley: The Legend Live, and 1982’s Bongo Man which featured Jimmy Cliff. All three of these films are fairly standard concert films that offer little insight into the featured artist or the attending audience, which contrast the director’s 1979 film Reggae By Bus aka Reggae Sunsplash, which centered on the notorious reggae music festival that took place in Montego Bay from July 3-7th in Jarrett Park, Montego Bay.

The Reggae Sunsplash Festivals were the invention of Jamaicans Tony Johnson, Don Green, Ronnie Burke, John Wakeling, and Ed Barclay, who staged the concerts in their homeland to further reggae music as a worldwide phenomenon. The original festival ran annually from 1978 to 1998 and was revived one final time in 2006 to feature the most notable Jamaican artists of their time, many of whom, such as Yellowman, Toots and The Maytals, and Big Youth, would subsequently release their individual performances from the festival with great returns given their prominence in the industry and the popularity of the event. After the success of the first Sunsplash, director Paul traveled to Jamaica almost a decade after his first documentary, Open Air 70, to film the second appearance of the festival and to interview artists involved with the festival and Jamaican citizens about the appeal and importance of reggae music, specifically from the Rastafarian perspective, which was rarely seen in reggae documentaries of the time.

Much like the soul music documentaries of the 1970s, Save The Children and Wattstax, concert scenes in Reggae By Bus are inter-spliced with the aforementioned interviews with artists and musicians alike. One poignant interview early on is with Winston Rodney aka Burning Spear, the consummate roots reggae vocalist and O.D. recipient, who just a year earlier had starred in the legendary narrative film, Rockers, directed by another non-Jamaican, Theodoros Bafaloukos. Interviewed playing a game of soccer in St. Ann’s Bay, Burning Spear is quick to tell director Paul that reggae reflects the voice of the Rasta community while the heavy handed, dry over narration reminds us that his music is “not about love or sex but is part of a political, nationalist Rastafarian propaganda machine.” When Paul asks Burning Spear about the togetherness of the Rastafarian community, Spear responds positively by saying, “We live together and play together. We are always together.” Soon we are oceanside with a group of Nyahbinghi drummers who sing along with their drumming and who then speak about the crucial nature of drums in Jamaican music in that the drum originated in Africa and is uplifting to the Jamaican and “puts them in the driving seat” as it brings them back to their pre-slavery roots. The drummers then discuss the “freaky nature” of modern reggae with its reliance of synthesizers and wah wah pedals, which draws away from the pure nature of the music.

Of all the acts that performed at the festival, only four acts are singled out from the 2nd Reggae Sunsplash to make it into the documentary: Bob Marley, Peter Tosh, Third World, and Burning Spear, and each are given substantial performance time on screen. A few standouts are the thrilling funk/reggae performances by Third World on the tracks Talk To Me and Third World Man, Burning Spear’s heartfelt voice on Slavery Days and much of Bob Marley’s impassioned performance, which constitutes the final third of the film, with my highlight being a reggae version of the earlier rocksteady gem from 1968 written by Marley for The Wailers’ own Wail N Soul label, “Hypocrites,” with the I-Three’s, Marley’s backing vocalists, filling in brilliantly for Peter and Bunny. By 1979, Bob Marley was a worldwide phenomenon, and thankfully there is a lot of footage floating around of his performances from the late 1970s, but this one is truly special. A short interview with Marley from his yard on Hope Road was inserted between the songs, and he speaks openly about how the other rhythms from Jamaica are for other classes of people and that reggae is the true music of the Rasta. The narrator furthers Marley’s comments about the true audience of reggae while we observe footage of the residents and shanties of Trenchtown, where Marley was born, and the impoverished area of St. Andrew’s Parish, where, despite its desperate conditions, managed to produce some of the greatest artists ranging from Alton Ellis to Delroy Wilson. Paul correctly explains that from “the mento, ska, and the rudy boy tradition that these musics were only appreciated by the lowest classes of  that Jamaica” and stressed the “constant war between police and Rastas,” as they (Rastas) were still viewed in a negative way by polite Jamaican society. Though the narration is sporadically administered, and the style is delivered in an exceedingly dry way that doesn’t fit the overall feel of the film, it provides a mostly accurate cultural context for the music by showing you a 1970s Jamaica that was engulfed in political violence, which led to a mass exodus of businesses resulting in a faltering economy .

Past the essential performances seen in most concert films and the accompanying interviews, there is always one moment that stands higher for me in most films of this kind that becomes the reason why I would watch it again, and in Reggae By Bus, that is the rare glimpse of foundation deejay Charlie Ace’s Swing-A-Ling Van in action on the streets of Kingston. Born Vernel Dixon, Charlie Ace would take his reggae-modified Morris van into all areas of Kingston selling the latest releases while live toasting over versions of newly pressed records. In Reggae By Bus we see Ace and a younger DJ taking their turns on the microphone while performing for a crowd that had gathered by the van. It is a fantastic scene that I’m sure director Paul was glad to have captured it, but again I sadly say “rare” in terms of footage as Charlie Ace was gunned down near his van roughly two years after this documentary was released. 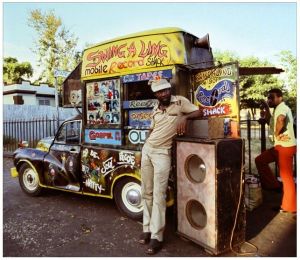 Unlike its soul music counterpart Wattstax, I wished that Reggae By Bus spent more time collecting the stories that would frame the importance of the Reggae Sunsplash festival in terms of its cultural impact. A few attempts are made to put it in context, and they do resonate, but a few more moments with the average citizens of Kingston would’ve provided a clearer frame for the event. Regardless of that critique, there is too much essential footage within Stefan Paul’s film to discount it as just another reggae documentary, and although there has never been an official home video release, fragments of the film do exist online and are well worth your time. It’s an essential watch for the reggae fan and a good introduction for any curious viewer who wants to learn more about reggae.