As seen by my great affection for Satellite Sam, I really enjoy Howard Chaykin’s work, perhaps a little more than I should. Thus, it is of no surprise that American Flagg!: Hard Times from 1985 forced me to stop my digging as I flipped past collections of Bill Griffith’s Zippy and Will Eisner’s The Spirit on the Comikaze exhibition floor. 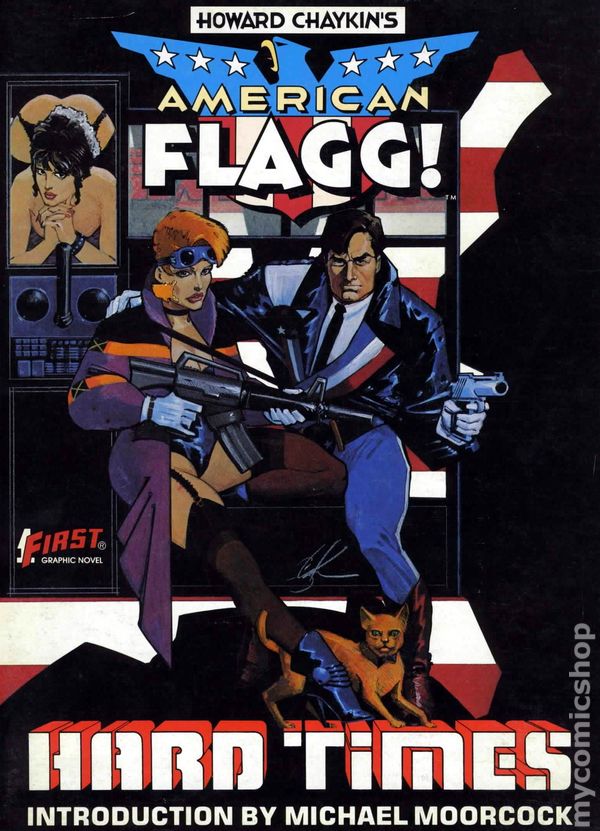 Chaykin’s male protagonists and femme fatales (or really any peripheral female character in general) fit the idealized form for both genders. They are figures inherently from the past in that they really no longer exist. The women are almost always voluptuous and clad to emphasize their curves; they have the proportions of Jayne Mansfield and the sultriness of Marilyn Monroe or Barbara Stanwyck, with much of their words loaded with double entendre. As for the other part of the Chaykin gender equation, the protagonist men are rugged with square jawlines and shoulders; they have somewhat charmingly naive faces and ever so slightly sinister smirks to remind you that they have more than just brawn; Chaykin’s male protagonists are the Guy Madisons, Rock Hudsons, and Gary Coopers of comics.

The villains, on the other hand, deviate far from the ideal images of the male protagonists and the women. They are overly thin or portly. They are too short. They are balding. They are unkempt.

But, despite the visual contrast between the protagonists and the antagonists, the characters in Chaykin’s work tend to all be quite flawed and somewhat rotten, and such is the case with the cast in American Flagg!

In the opening by Michael Moorcock, he addresses, rather bluntly, the consistent criticism of American Flagg!: that it is sexist. Sure, it is true that the protagonist of American Flagg! is your all-American, standard white, heterosexual male. However, returning to my previous statement, no character in the series is perfectly clean and pure; everyone in the Chicago of American Flagg! has clear weaknesses, be it power, wrath,  lust, or greed, and those vices drive them toward poor decisions. Under the pristine faces and bodies lies dark thoughts and deeds, making the characters fundamentally more like characters of film noir and less like those of 1980s teen films. In fact, you should be more offended by John Hughes films’ portrayal of women than Chaykin’s in the comics he was creating in the same time period, but I’ll avoid saying more and let you ruminate on that statement.

American Flagg!: Hard Times collects issues 1-3 of the series, completing the story arc of Rueben Flagg’s arrival to Chicago and his first experience as a ranger for Plex, the corporation that runs the universe after a series of great misfortunes and catastrophes force the government and corporation onto Mars. As a washed up television star replaced by a hologram and drafted into service duty by Plex, Rueben Flagg lands on Earth as a Martian by birth but Earthling by blood. Flagg has a naive patriotism for America and feels an obligation to help make Chicago a safer town to live in, but after meeting Chief Ranger Krieger and his daughter Mandy, he realizes that his gun-toting, Western style understanding of good and evil does not exist in the place he has landed.

The Chicago of 2031 has the rampant corruption of the Chicago of 1931. Plex, the major corporation that rules over the universe, parallels the organized crime outfits running the major cities in America in the 1920s and 1930s. Like the mobsters of the past, Plex has tyrannical control over everything, and every law has seemingly only one purpose: to make the executives at Plex richer and thus more powerful.

As with any dystopian government/authority, Plex also manipulates its people. Here, in American Flagg!, the company uses media to galvanize violence and create gang wars that generate profit through arms dealing and highly popular television broadcasting of the fights. Plex also uses subliminal messaging to encourage violence on innocent people, leaving the citizens in Chicago feeling vulnerable and in need of the Plex Rangers for security.

Unfortunately, Rueben does not understand the magnitude of Plex’s omniscience before his assignment, and he spends Hard Times finding out about its corruption of society and humanity. American Flagg!, at its core, is a science fiction noir; where Rueben, the outsider, must navigate a dirty, filthy world that will likely swallow him whole in his attempts to fix it.

And as a noir, American Flagg! could not be complete without its potential femme fatales. In this case, we have Mandy Krieger, the sharp-shooting, blunt, coarse, and sensuous daughter of Rueben’s boss. Mandy has a clear fascination with Flagg that draws the two closer and closer (and into bed, of course). In addition to Mandy, we also have the hostess (i.e. madame) Gretchen Holstrum and pilot Crystal Marakova. By the end of Hard Times, it is a bit unclear who will lead Flagg to the greatest danger, but we do know that his own lasciviousness will naturally get him into trouble. Combine his inclination to jump into bed with any attractive woman who approaches and his overly optimistic sense of duty to incite change, and Rueben Flagg stands on a course that cannot lead to neither a good end nor an overwhelming sense of catharsis.

Beyond the alluring characters and plot, American Flagg!: Hard Times also features exceptional artwork, mixing structured panels and free-form constructions on its pages. The Chicago of 2031 as imagined by Chaykin in the mid-1980s certainly has more art-deco influences than I suspect the real 2031 one will have when it arrives, but as a result, his world, while cold in its pervasive technology, also has a certain elegance to it in its clothing, cars, and marquees.

Given its noir qualities, American Flagg!, though set in 2031, which is not too far away from today, still remains relevant. It serves as a reminder that despite the progress we make in technology, we will still fundamentally have issues with corruption and media manipulation in the future to come, and if we get wrapped up in the consumerism associated with technological advances, we’ll have progressed no further as a society than from where we were in the 1930s. I wonder if 2031 will also bring about a talking cat such as Raul, Reuben Flagg’s confidante, that can sense subliminal messages and navigate through the human world as a covert listener and watcher. I hope so, since he’ll be an especially insightful, enlightening, and perhaps the last neutral party in a post-internet, advanced data and technology age.